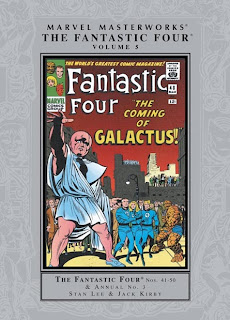 Stan Lee and Jack Kirby were a force of nature during this era. They tossed out so many brilliant ideas in such a brief period of time that it leaves me awestruck. After a trio of issues featuring the Frightful Four we get the wedding of Reed Richards (Mr. Fantastic) to Susan Storm (the Invisible Girl) in Annual No. 3. Unlike DC, this would not be an imaginary tale to be undone next month. This was a real, actual life event unfolding in the ever expanding Marvel Universe. That issue showed what a real, integrated universe it was like no issue before it. 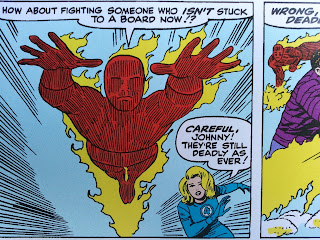 Doctor Doom used his High-Frequency Emotion Charger to “fan the flames of hatred in the heart of every evil menace in existence!” The result was nearly every villain that the Fantastic Four tangled with up to that point converging on the Baxter Building. Luckily, every hero in the Marvel Universe was attending the wedding, so you got plenty of cool mix and match battles, such as S.H.IE.L.D. vs. the Puppet Master; the X-Men fighting the Mole Man and his mindless minions; the FF and Doctor Strange tussling with the Red Ghost and his Super Apes; Thor vs. the Super Skrull; Daredevil vs. Hydra; Captain America locking horns with the Cobra, the Executioner, and the Enchantress while Hawkeye removed Mister Hyde from entering the fray; the X-Men fighting the original Black Knight, the Mandarin, Electro, the Unicorn, the Melter, and the Beetle; Iron Man versus the Mad Thinker and his Awesome Android; Quicksilver tangling with the Human Top; and Attuma's surface world invasion thwarted in a scene worthy of It's A Mad, Mad, Mad World. In short, it's simply one of the greatest comic books of the Silver Age. 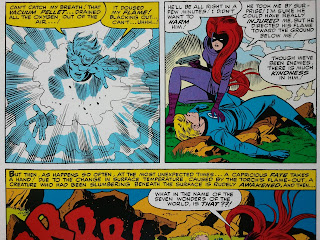 You would think that Lee and Kirby would cool their heels a bit after a blockbuster like that, but you'd be mistaken. Madam Medusa was already introduced as a member of the Frightful Four, but not much was known about her. Issue 44 heralds the arrival of inker extraordinaire Joe Sinnott, a most welcome change after Vince Colletta. Colletta did not compliment Kirby's pencils in my opinion. Issue 44 is also when things kicked into high gear. The Gentleman's Name is Gorgon! is pure genius. Gorgon, in his very first appearance, tries to take Medusa back to their world, and to their own people. It was forbidden for her to be out in the human world. Dragon Man is woken up during their battle, complicating things even further. 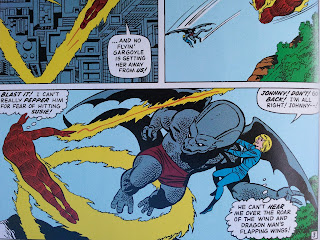 Issue 45's Among Us Hide...The Inhumans! is another high mark for the era. When Marvel slapped the phrase The World's Greatest Comic Magazine on the cover every month it was a case of no brag, just the facts. Karnak, Lockjaw, Crystal, Triton, and Black Bolt all debut in one issue. That's right, the Inhumans were fully formed right out of the gate. Maximus the Mad, the Great Refuge...everything was ready to go. Mind you, they did this in one month. No creator retreats. No crossovers. No mapped out arcs. Just unbridled, unrestrained creativity. Lee and Kirby were going off and nothing could stop them.

This storyline carries us into issue 48. The Inhumans “arc” is finished by page 7, the last two panels of which we are introduced to yet another iconic character: the Silver Surfer. I kid you not, this stuff went on month after month without missing a beat. Imagine how many arcs today's “star” writers would milk out of each issue. But that's not all! Not content to phone in the remaining 13 pages, we instead get the coming of Galactus. Galactus, preserved in all of his erroneously colored glory on the final page of issue 48. When I say that the Masterworks adhere to the original color palette I mean it. They even faithfully recreate the mistakes! 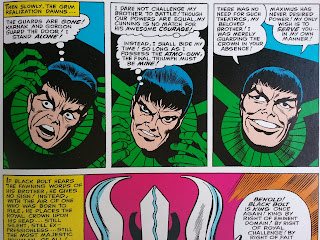 Issues 49 and 50 see Uatu the Watcher coming really, really close to breaking his oath of recording the activities of the lifeforms in this section of the galaxy without ever interfering. Galactus also came out of the box fully assembled, his motives and intentions clearly presented from the very first. Frickin' incredible. 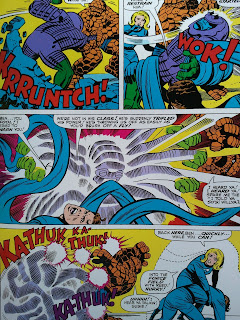 Between The Fabulous Fantastic Four Marvel Treasury Edition from 1974, which collected truncated versions of issues 48-50 and Fantastic Four Omnibus Vol. 2, I've read all of these issues before. I sold off my copy of Fantastic Four Omnibus Vol. 2 a while ago for a couple hundred bucks and then turned around and bought the softcover volume 4 and back to press 2007 hardcovers of Vols. 5 and 6, all of which use the same restoration as the Omnibus. That book is coming back in print this fall, but I won't be triple dipping. I'm happy with these books...and the money that I pocketed selling my Omnibus on eBay.

Issue 50 introduces a long-running member of the FF's supporting cast: Wyatt Wingfoot, Johnny Storm's Native American college roommate. Volume 5 is the most satisfying of all of the Lee/Kirby FF Masterworks, but you really can't wrong with any (or all) of them. Any aspiring comic book writer needs to sit down and study this to see how the masters did it. They were fearless and took countless chances, and they all paid off.
Junk Food For Thought rating: 5 out of 5.

The OCD zone- The Marvel Masterworks line of hardcovers are my poison of choice. This particular book is from a transitional era in the production values of the line. While they finally had the paper and restoration down, the American-made sewn binding is thick on the glue and nowhere near as nice as the Chinese-made Masterworks which would surface a year later.

DVD-style Extras included in this book: This book was from the era before such things were common in Marvel Masterworks.

Linework and Color restoration rating: 5 out of 5. The second Omnibus, this 2007 hardcover printing, and/or the 2011 softcover is the only way to go. All three use the same state of the art restoration and original color palette. Marvel should recall and pulp the older, inferior printings. They soil the Masterworks name. The only gripe that I have is a scan line on one portion of the page shown below. 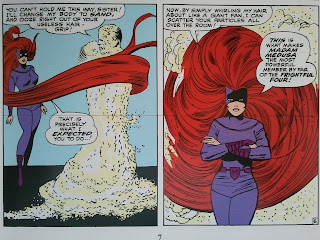 Paper rating: 5 out of 5. Beautiful thick coated stock paper with a slight sheen. There was a problem with several pages, where they weren't fully cut and I had to tear the “perforation” on the top in order to open and read those pages. Terrible. 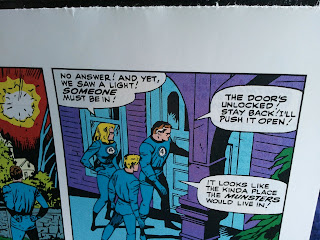 Binding rating: 4.25 out of 5. This sewn binding is incredibly stiff, although it does loosen up significantly if you play with it enough. Still, those spoiled by a steady diet of modern pressings will be disappointed with how much work it takes for this book to lay perfectly flat.