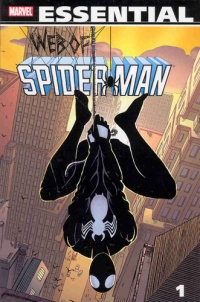 I bought every single one of these issues off of the stands on the day of release. This title was always like the red-headed stepchild of the Spider-titles, lacking a consistent creative team or approach. I didn't care for most of these issues as an 11-12 year old kid but enjoyed them as an adult for the most part.

Issue 1 was released on Thursday, December 27, 1984. This would be the newsstand/ 7-11 release date. The Direct Market was 3 weeks ahead of the newsstands, at least in Metro Detroit at that time. Your mileage may vary depending on where you lived. It came out the week after Peter Parker, the Spectacular Spider-Man No. 100, the events of which lead directly into this issue. I've said it before, and I'll say it again. If/when the Masterworks get to this point, all three titles will need to be merged into one line, as the storylines tend to bleed into one another and will result in an unsatisfying read if you have to jump from book to book to read them. Or, worse still, we will get multiple issue repeated, i.e. Kraven's Last Hunt, across multiple lines. Either way it's a lose-lose scenario. 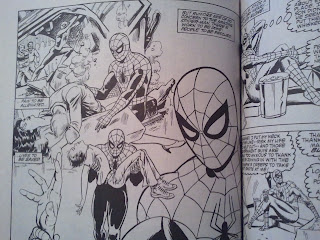 Issue 10 has a true variant cover floating around out there. I refer to variants as printing discrepancies, not “dealer incentives” where comic shops order extra copies to get a 1:50, 1:100, 1:200, etc., variant to sell above cover price. The copy of issue 10 that I bought off of the spinner rack at 7-11 had a .75 cover price with a .65 price tag covering it. .65 was the cover price on the Direct Market edition. I know because I checked at the time. My best guess is that some Canadian newsstand editions got mixed in and repriced on the distributor level, or they were misprinted with a .75 cover price and then repriced accordingly. The copy shown in this book has a newsstand edition .65 cover price, fueling my theory. This is truly one of the great mysteries at our time. Leonard Nimoy needs to resurrect In Search Of... and do an episode where he gets to the bottom of this. 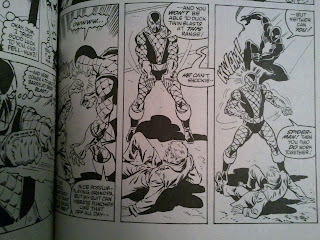 The chicken scratch artwork that would define the '90s began here, at least for me. Kyle Baker, Marc Silvestri, and even Art Adams (whose early work I despise but I like his modern stuff) emphasized flash over substance. This style of art drove me out in late '89/early '90 and kept me away until a decade or so ago. Bob McLeod's artwork in issue 11 and 12, however, is incredible. He is an underrated and seemingly forgotten great from this era.

The writing is decent if inconsistent. David Michelinie cuts his teeth on the character on this title before assuming the flagship title (Amazing Spider-Man) a year or so later. Peter David also wrote a couple of issues, although issue 7 may have been an inventory story that could have just as easily appeared during his run on Peter Parker, the Spectacular Spider-Man.

So while I read and reread all of these issues repeatedly during this time, I don't have much nostalgia for these issues. They simply weren't that good for me to remember them fondly. Having said that, I look forward to the day that I can upgrade and buy Masterworks or an Omnibus of this stuff.
Junk Food For Thought rating: 3.5 out of 5.

These Essentials remain a bargain. 500+ black and white pages printed on pulp paper for $19.99 MSRP. Cheaper than a movie ticket and pop and popcorn combo. My only gripes about the line are the lack of page numbers and the lack of cover artist credits. DC puts page numbers on their Showcase Presents line of phonebooks. The cover artists were often different than the artist for the issue, so a dedicated cover artist section on the table of contents is necessary.

Paper rating: 3 out of 5. These phonebooks are printed on cheap pulp paper, which is fine for what these books are supposed to be: inexpensive reads. The pulp paper lends a nostalgic air to the proceedings as well, even though this title never used pulp paper. Web of Spider-Man was among the first Marvel titles to use the flexograph water-based inks on bright white stock.

Binding rating: 4 out of 5. Glued binding. Nothing to get yourself worked up over. This book lays pretty flat for the most part.

Cardstock cover coating rating: 5 out of 5. Broken record time: I like the lamination that Marvel uses on their cardstock covers. OCD tested, OCD approved.